Hunter Library now offers two convenient film viewing rooms, for use by instructors and students, to screen films for class-related assignments. Each room is equipped with a large flat-screen television and surround sound, standard and Blu-ray DVD players, a VHS player, hook-ups to share a laptop display using the television, and a whiteboard. The film viewing rooms are located adjacent to the new Java City lounge area.

Get more details at http://www.wcu.edu/29502.asp or come to the Circulation Desk for more information.

New to the Library's Homepage: Find It!

Find It! is a one-stop search that lets you find Hunter Library’s print, digital, and electronic information all at once! Contained inside are over seventy databases to which the library subscribes, plus hundreds of ebooks, and Hunter Library’s catalog. Type in your topic and find the best information for your research--including books, DVDs, and articles from newspapers, magazines, and academic journals. More information about Find It!

The Classic Catalog and links to individual databases are still available on the library's website. 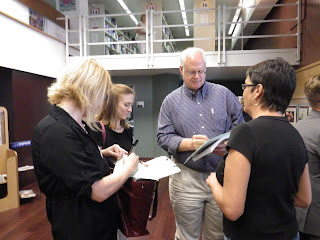 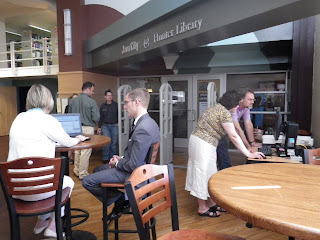 Hunter Library welcomed dozens of new faculty during New Faculty Orientation on Thursday, August 12th. Each new faculty member was greeted by his or her subject liaison, and provided an informational tour about library services and resources, meeting other library faculty and staff along the way. Welcome aboard, new faculty! We look forward to a productive collaboration for teaching and learning.
Posted by Robin at 8/23/2011 04:30:00 PM


Here's a sampling of some of the new books and films that have arrived
at Hunter Library in August 2011.